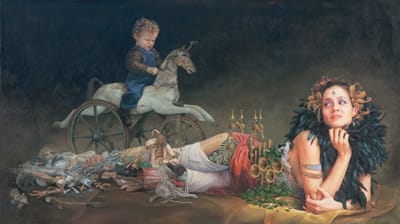 For our most recent artist interview we connected with painter Heidi Taillefer. Heidi was born and currently lives and works in Montreal, Quebec, Canada. Her life experiences and inspiration seem to have a fascinatingly dream-like quality, much like the intricate, hallucinatory visions in her oils on canvas. 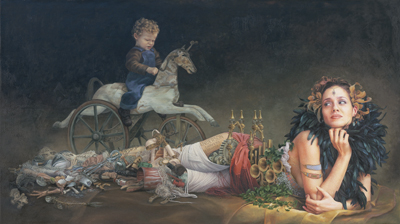 GR: What events lead you to become a professional artist?

HT: When I was 21 years old I did not know what I wanted to be. I went on a very adventurous trip to Dawson City in the Yukon, where I became a waitress for 2 weeks at a very popular restaurant. I lived in the woods in a tent, on Crown land, so I did not have to pay rent. I took the ferry each day to cross the Yukon river and get to work, (I showered at the laundromat, FYI). There was one waitress there who was 15 years older than I was and was a local. She was all dark from her tanning bed sessions and leathery looking, and she spoke to the customers (all men, miners mostly) with the most squeaky and babyish affected air to get more of their attention. Since there are about 8 men to 1 woman in the Yukon, a new woman coming onto the scene, especially so much younger, meant that I suddenly started to get the attention she sought from these men, as well as the kitchen staff. She hated that, and made it very hard and unpleasant for me to work there. I was called into the manager’s office on numerous occasions with fictitious issues and complaints against me. That went on until one day I decided not to return to my shift anymore (which didn’t matter because I wasn’t paying rent and I’d saved my money!).

I went up the Dempster highway with a fire-fighter friend I made up there, and off into the Mackenzie Mountains, where there are 24 hours of sunlight in the Summer. I walked the mountain ridges as I contemplated this problem I had with the waitress, which I was too naive to understand. I decided I wanted to be alone and work freely for myself, and as an artist would be perfect since I was already actively producing art on my own. Back in Montreal I was told about the possibility of working as a commercial illustrator, so I set out to become one. I secured a business grant to support me for a few years to get started, and I used my paintings as portfolio pieces along the way. I also exhibited them in the US and Canada in various galleries, until I secured one gallery in Montreal which sold my work very well.

GR: Tell us about your art-making process, how did you choose oil painting?

HT: I started painting with watercolor at the age of eight, and by twenty-two years old I tried working on my style (robotic) with acrylics. It was a total disaster, since I wasn’t used to the handling of the paint, but I was strongly encouraged to try airbrushing which would really sharpen my style, and that’s mostly done with liquid acrylics. I was given an airbrush by a major Canadian illustrator and I started playing with it, and got used to acrylics, which really made my work more vivid. Then as I shared a studio with that same illustrator at the age of 27, I was strongly encouraged to try oils. I tried them in my style and it was a disaster once again, almost the opposite in handling to acrylics, but I stuck to it and got the hang of it and now it’s my preferred medium. I do have to use a drying agent however to avoid the frustrations I originally experienced, since it dries so slowly and in order to make any progress I need for the paint to be dry.

GR: How would you briefly describe your current body of work?

HT: I would say it is surreal, with elements of symbolism. I am currently exploring themes found in Santeria by depicting each one of the orishas, these are also found in Candomble in Brazil which I am familiar with after travelling there. Santeria is a religion developed by slaves from the Yoruba people of Nigeria, combined with Catholicism, and is practiced in Cuba. The orishas of Santeria are shared by other pegan religions which are an amalgamation of African religions and Catholicism, and versions of these “saints” can be found in Hatian voodoo, Candomble, and various other religions.

GR: What’s been your most meaningful project or work of art so far?

HT: I would say the inkblot series, starting with the first one I painted in 2013. In 2012 I experimented with meditation a great deal, and after meditations throughout the day, I could swear I could start to feel my chakras, starting with the brow chakra (or 3rd eye). This is characterized by a week of terrible headaches as one meditates until one can feel a kind of aperture opening on the forehead, though it is a non-physical “physical” sensation–hard to describe. This was followed by the heart chakra which is super sensitive, and I felt as if I could stretch it open, which yielded a burning sensation that was not unpleasant.

Eventually, there was a kind of debilitating pain in the heart chakra area, which I had checked out by energy workers since I didn’t know where else to turn! I had all sorts of energy work done to no avail, until I even went to an institute specializing in occidental metaphysics found in Montreal, where I underwent a “chakra massage”. As the practitioner sat ten feet away from me with his palm facing me, I could feel a powerful vacuuming feeling all up and down my body–arms, legs, torso, etc. Since we have chakras all over our body, I assumed this is what I was feeling. In the end, I had to stop meditating because of this heightened sensitivity I developed, which I still can’t explain. The painting which came out of this is called “Starting Something You Can’t Finish,” because I couldn’t stop what seemed to be non-physical physical sensations which were debilitatingly painful. Which, in retrospect I decided to call somatic hallucinations (hence the inkblot). Though, sitting in front of that metaphysics practitioner proved to me there was more to it than that. In any case, I decided to pursue the idea further and explore the subject of Santeria instead of chakras, after a trip I took to Havana in 2015. 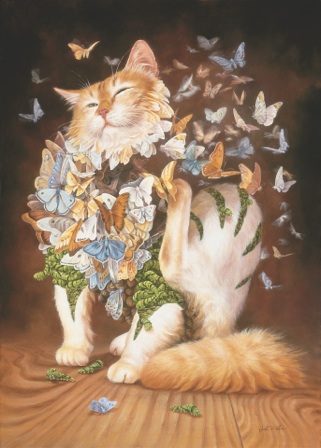 GR: Do society, current events, or the nature of the art market influence what or how you create? If so, how?

HT: Right now I am very influenced by the art market and it is part of what is driving my current exploration of symmetry and the ink blot motif. I was recently approached by a gallery who expressed an interest in this style, which motivated me to produce more work like it. They are a huge corporate gallery who take a very long time to get to know an artist, and I have yet to present them with the latest body of work which I’ve produced, but I decided to follow their lead since they liked “Starting Something You Can’t Finish,” which was also juried as best in show last year at the Baton Rouge 10th Annual Surreal Salon, juried by Ron English. After taking a bit of a break from painting and only working on commissions for a couple of years, I also found this style to be a refreshing change from what I normally produce, sort of experimental in a way, which adds energy and life to my productivity.

GR: Where can readers see your work in person?

HT: I was recently part of a group exhibition at the Halle Saint Pierre Museum of Outsider Art in Paris. I have been taking a bit of a break from painting, largely because of the cycles of energy in creativity, and of 12-15 hour paint days, I felt tapped out after 25 years. However, I am still producing and a show will be forthcoming in the mid-to-near future.

We’ll be looking forward to Heidi’s new work and next exhibition. Meanwhile, you can still catch her limited edition prints in the Gitana Rosa shop. 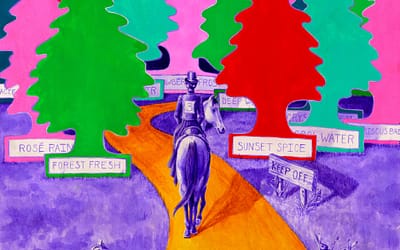 Catching up with Karen Epstein